The strength in depth of the professional tour is probably as great as it's ever been.

But even below this pool of vastly talented players, there are many pretenders to the throne just waiting for their chance.

OnCue spoke with 17-year-old star of the future Hammad Miah, who currently plays on the baize at Pockets snooker club in Hertfordshire, as he strives to break into the professional game over the coming years.

With considerable century breaks already to his name, a highest break of 144 and a win against Jimmy White in the bag, keep your eyes peeled for this great break builder in the years to come.

When did you start playing snooker Hammad?

In 2001, I went to watch the Masters with my dad. He got me into it. I watched Paul Hunter and all the top players at that tournament and it really inspired me. It was good to watch so I thought I'd play myself. After that, I just picked up a cue and it's been all good ever since. 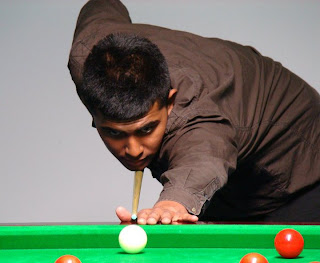 Has it always been quite natural to you?

Yeah, I picked it up quite quickly at the start and that meant I enjoyed it, so that made me come down more often and keep playing. It was that simple.


How far are you away from turning professional now?

In my eyes, the only thing that's wrong with my game at the moment is my positional play but, of course, that's a very key factor. My potting is keeping me going, but I know I can't rely on that all the time. When I can advance my positional play to the next level, I think I'll do very well, but I know how tough it will be to break into the tour even with that. But I think if I can get in the tour in the next two years then I'll know I've got it. I know I've got it now, but I've just got to work harder and make sure it happens. I've got my sponsorship so it's down to me now. But when I practice well, I get zoned in and everything happens for me on the table. These are the moments I really believe.

How have you been performing in competitions recently?

Late last year, I won my first junior tournament on the English Regional Tour. I enjoyed that because there's some good players involved. I came first in the play-offs at this event and qualified for the tour I'm in now, the Premier Tour. In this, there's six tournaments for 48 players and, if I get into the top three in that, I'll be able to represent England and also play in the world under-21 and euro under competitions, so that's the incentive to work hard. In the first two events, I just missed out on qualification through the groups and I'm ranked around halfway, but there's something for me to build on.

Where do you see yourself against the other players on that tour?

I'm really pleased to be in a league with all other top junior players. It shows I'm playing at a competitive level.. I can't be complacent. I know I can, and will, do well. I'm quite a confident person, but I need to keep going and be patient for it to come. 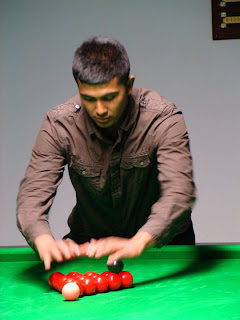 You've already made a break of 144, so I assume break building is a strong part of your game?

Yeah. When I was 12, that ability to break build just came on really strongly. I was 15 when I made that break, and it felt really good. It makes me want to score heavily every time I get in the balls. I've made between 50 and 60 centuries but if my positional play was better I know it could be more. I often fall back on my potting rather than making it easier for myself.

You beat Jimmy in a club in an exhibition. How did that feel?

He's a legend so just to be playing him that night was great. To go and win was a dream come true. I didn't feel too nervous either. I was playing in my own club, I'm used to it and I just concentrated so much on playing well that I didn't really have a chance to get daunted. Former pro Jason Pegram, who runs the club, introduced me as the best player at the club though, so that put pressure on me more than anything else.

There's still some way to go, but do you ever let yourself dream about being a pro?

Yes, I want to make it so badly. I'd like to fast forward and see where I am in 10 years time. Hopefully, one day, I'll be holding the world trophy. But hard work will get me there, not dreaming.

Who's your favourite player, who do you like watching?

It's obviously got to be Ronnie. He's someone I look up to. When he gets in, he's fantastic. At the World Open, he was outplayed by Neil Robertson, who is another good player, but I like the players who score heavily and like attacking.

Are you watching much snooker at the minute and who do you fancy for the worlds this season?

I'm always going to fancy Ronnie because, if he wants to win it, I think he will, but there are a lot of other good players so who knows. You can't even write off the underdogs these days. I can sit and watch snooker for hours and I sometimes do. If I'm in the club, I'm busy playing and there's so much going on but at home I'll watch any match.
Posted by garymoss87 at 9:40 am

Welcome to On Cue snooker blog. Cutting-edge baize opinion at its finest, written by Gary Moss.